Games and an Ungame

Some things do not bear much explaining. Paddy’s attempt to come to terms with Australia as an idea while suffering a coffee liqueur overdose in the eternal night of the Scottish winter is one of those things. Read and play at your own risk.

Combine a heady mixture of Anthony Bourdain’s ranting with binge consumption of Stranger Things, add some curious design ideas from Megan Bennett-Burks and leave to simmer. The Connoisseurs is a game about the food industry, surreal hellscapes and hard choices.

Bastard Breed is a diceless storytelling game about a werewolf pack in a time of crisis. Exploring themes of family, authority and bubbling savagery through the use of ritualised relationships and constantly shifting power dynamics, it is designed to play out to its inevitable conclusion in a session or two. Strongly influenced by Steve Hickey’s Soth. 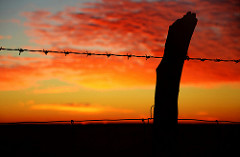 Pic is Sunset by Chris Fithall on Flickr, CC A

Warzone is a game about underaged mech pilots trying to stay alive and grow up in the face of a deadly Enemy and an uncaring Command. Very early days yet, but here are some Character Mockups, a Move Sheet and the living Development Notes for those interested. Powered by the Apocalypse.

For those wanting the fun and psychosis of Catalyst Games’ Shadowrun without having to manage all those pesky rules… well, here is a Lasers and Feelings adaptation, with a handy little character and story generator attached. Mind this only really works if you already understand Shadowrun, so if you don’t… check it out.

A joke that got out of hand, where a minor laugh over trolls under bridges collided with negative space theory and some readings on travel psychology to create this monstrosity. Originally built to work with Chronicles of Darkness, the game maps pretty nicely to Undying, Fate, or Don’t Rest Your Head.