Well, the Liberation Industries team took to the world and character creation section of our Karma in the Dark game with characteristic gusto. The full recording of this technologically hobbled session is still available through the Whimsy and Metaphor Twitch, and should surface on our Youtube pretty soon. But for those in the Too Long, Didn’t Listen camp… I’m going to do a few quick blog posts here to summarize the results, and whet your appetites for when the next live sessions air.

Now Karma offers us some downright robust world building tools; though the game’s elevator pitch is probably “Blades Powered Shadowrun” its got a lot more going for it than that, and can basically handle all of your magic cyberpunk needs. It lets you build a world with a strong focus on privilege, and the exact avenues that power is expressed in that dystopia.

Naturally, we decided to set our game in Sydney, Australia. Or at least, what’s left of it.

Power is influenced by three factors in Karma, chosen by the players at the start of the campaign. Our group chose Metatype as one factor in a nod to classic Shadowrun; elves and humans have an easier time negotiating society than their goblinoid cousins. The other two factors we chose were Bloodline and Property, with family ties to the Oligarch Clans offering a measure of protection, and a citizen’s social clout strongly resting on how much capital they can bring to bear.

With that in place, we have a distinctly neo-feudal city.

Even before the magical Outbreak hit, Metro East was not doing so well. With its lower levels subsiding in ever greater floodwaters and further growth choked by geographical restrictions, the skyline grew desperately taller, clawing for the sky even as the building’s foundations were swallowed by the sea. The city grew upwards in layers, like a mad termite mound.

Then the Outbreak struck, and the world changed completely. With the return of magic to the world, technology that had been the lifeblood of a globalised economy – wireless communication, positioning satellites, even long distance radio – went silent in the face of a global magical susurrus. Technology had to be rebuilt in shielded, wired form, and cities were left to fend for themselves. It is a metropolis of text-fed terminals, flickering hologram billboards, and murky phone booths with gnarled nerve-jack leads swinging in the ever present storm winds.

The crash was eighty years ago, and only now are we returning to the globalised world that was lost. So far, even the great corporations have been unable to challenge the primacy of the City States, but with more ships arriving in Metro East from abroad every day, that may be set to change.

It is a city of great divisions. Industry is driven by intensive, exploitative aquaculture and risky ocean mining, offset by a ravenous urge for respect that has manifested in a cutting edge fashion scene. The Oligarchs maintain their hold through monopolies on the most alarming magic – they say the rites of divination that keep them ahead of their rivals are unspeakably horrid – and access to the best medical care. They have developed a taste for flaunting their elegant, tailored bioware, the symbol of their coveted longevity, with the fashion for gauzy, revealing garments that display humanity’s augmented peak. For the kelp-fed poor, crude cyberware can be the difference between life and death, but social pressure often drives it to be covered; given the harsh weather, the working classes make their way in shrouds and bulky raincoats through the torrid, waterlogged industrial quarters. Life expectancy gets lower the deeper you go.

Metro East is viewed by outsiders as both an enclave of vain upstarts, and a pit of desperate criminal savagery… and both of these statements are true.

Tune in next week, and we’ll take a look at some of the City’s movers and shakers, at least in the tumbledown neighbourhood our characters inhabit. If you have any questions, drop a comment, or have a look at Cass K Designs; this game comes thoroughly recommended! 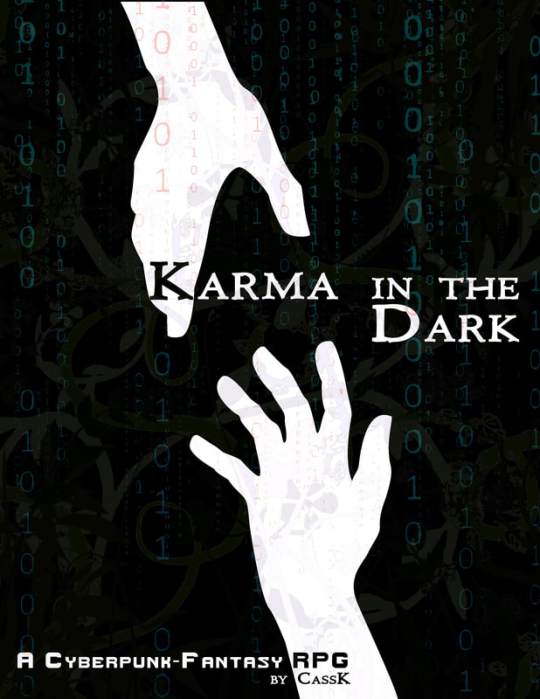